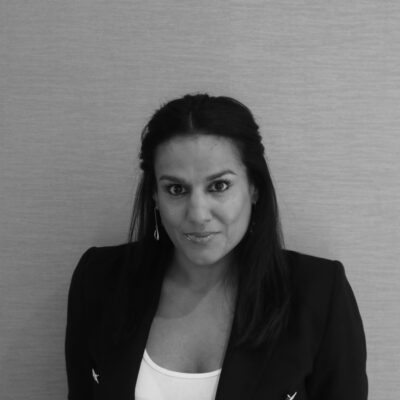 Founder and Director at MK Law, Manisha Knights is a lauded Solicitor-advocate with a reputation for an uncompromising resolve in defence of those accused of serious crimes. Manisha strives to encourage her team to follow her driving principles and fight without compromise for their clients. Manisha hopes to inspire younger lawyers with her courage and purpose and to bring together a forceful team of lawyers who leave no stone unturned in the defence of their clients.

Manisha completed her LPC in 1998 and immediately knew that she would pursue a criminal defence career. Passionate about her chosen field of law she completed her Masters in Criminal Litigation in 2000 and began clerking for a Serious Crime firm in Manchester before moving to a firm in South East London where she trained and qualified In December 2003. In November 2006 she qualified as a solicitor advocate in both crime and civil law and began conducting Crown Court Hearings

In January 2008 she established MK Law in a bid to create a firm of solicitors and advocates offering a comprehensive Crown Court advocacy service. Manisha started recruiting reputable lawyers and the firm began to grow both in footprint and in reputation. MK Law was soon firmly established as one of the most reputable in South East London. In 2016 the firm expanded its criminal department into North London and is now one of the most reputable firms London – wide.

She is a member of Solicitors’ Association of Higher Court Advocates is often invited to join round table meetings. She headlined in the Law Gazette in 2013 with her views about the positive shift of the change in attitude towards solicitor advocates over the years. She was a guest motivational speaker at the youth for “Inspiring Youth Momentum 2014” in Croydon, and is regularly invited to speak at conferences and at universities and colleges around the country. Manisha has mentored many young aspiring lawyers and guided them and lead them through the many obstacles and hurdles that young lawyers have to get through to attain their goals.

Manisha is regularly instructed in Crown Courts all over London, for a wide range of offences.  Most recently she has appeared in the Crown Court at Croydon for an allegation of attempted murder. She defended a high number of rape allegations and serious cases of violent and firearms offences and has an enviable acquittal rate . She has also been instructed on and has successfully defended a number of white-collar allegations most notably including a large-scale VAT fraud in Kingston Crown Court where her client was the only one of 7 acquitted.

Manisha is regularly instructed to represent high profile clients in both professional sports and in the music industry. As the consummate professional, she has always ensured that those cases are handled with the utmost discretion.

R v W & others (2008) – Central criminal Court – Manisha was the litigator on this case and her client was charged with two other for murder. Her client was the only one acquitted. Widely reported.

R v Blake (2011) – Central Criminal Court – an unemployed man grabbed £25,000 from a security guard because he could not afford a birthday card for his wife. Widely reported.

R v Q P & another (2012) – Accused of assisting an offender (her son) who was accused of murder. Manisha’s client was acquitted.

R v KG  & Others (2013) – Kingston Crown Court – A multi-million pound VAT fraud, Manisha’s defendant was the only one acquitted.

R – V IK (2017) Terrorist Case litigated by Manisha where the Crown prosecution service were persuaded to offer no evidence.